← back to the blog

I started having contractions on my due date — March 10th, 2009 — while we were picking up our car from the WalMart automotive center, after my tire had exploded that afternoon. It was an exciting due date full of tons of things I did not expect to happen.

I had no clue what having a baby was going to be like. I had coasted through pregnancy with nary a Braxton-Hicks, so these sudden little, “Hey, ow!” moments were pretty surreal, and I remember saying to my son’s future godfather, “Man, I don’t want to give birth tomorrow.” But timing them (while watching Boston Legal DVDs) proved to be erratic, anywhere from 10 and 30 minutes apart. Whatever, no biggie. We watch more Boston Legal and go to bed at about 1AM.

Imagine my surprise when I wake up at 3 AM with contractions for real. I won’t bore you with this story again, but it’s common knowledge by now that I did, in fact, give birth the next day.

I don’t think I have to tell anyone with kids that this sometimes feels like a really elaborate dream that I forget a little bit more of each day. As we approach March 11th every year — loaded with not only the significance of my late (biological) father’s birthday, and the day that our lives genuinely changed forever.

We’ve done this before. At one year it felt sort of novel but not all that game-changing. He was still a baby. 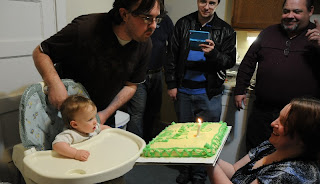 Two is so much stranger, because he’s not a baby anymore — he hasn’t been a baby for months — but is turning into this child, and I never imagined what having a child would be like. He runs around and plays pretend and reads books and listens to what he’s told (sometimes). We can have conversations to a certain extent.
When he was a baby I couldn’t imagine what he would be like as a toddler — hard for me, because I have an imagination on me — and now, as he’s a toddler, I find myself crippled by the fact that I cannot imagine what he’ll be tomorrow, let alone in another two years.
Lest this sound like me being morose — I’m not! I’m in awe. There isn’t a whole lot in life that render me to blubbering speechlessness1, but the growth of my child is one of them. My father-in-law frequently bitches about the misuse of the word “awesome,” being further removed from the original meaning of, “stuck dumb by the awe of God,” or something like that.2 So with that in mind, I can say in both slang and literal meaning:
Seeing Miles turn 2 is awesome.
Being a mother has shattered my every understanding and expectation in life — most days my grip on this reality feels tenuous at best. But I wouldn’t trade it for a thing, and on March 11th every year we not only celebrate another successful year with our son, but ourselves, and how far we’ve come in being graced by this bizarre, amazing child. 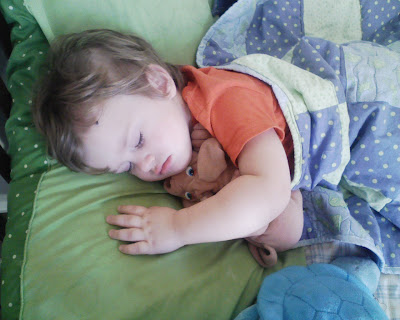 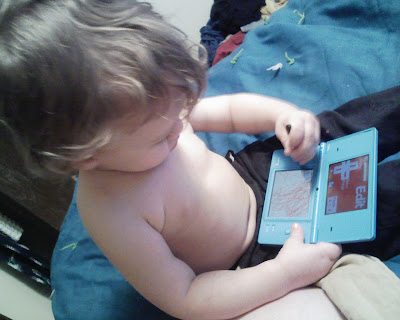 1. Another thing: there are an infinite amount of numbers between 0 and 1. Yeah, you can thank my husband for sharing that little hell with us.